Climate » 2016-07-03 . . . can’t call in an air strike on a warming climate…no military solutions to the most profound problems that are imperilling the planet. … International Crane Foundation in North Korea.

“You can’t call in an air strike on a warming climate…There are no military solutions to the most profound problems that are imperilling the planet.

It’s got to be diplomacy,” says former diplomat Daryl Copeland

Near the end, Enright challenges the idea of working with all nations using North Korea as a case in point;  Copeland defended.

I wanted to reinforce what Daryl Copeland is saying and what Michael Enright was challenging.   The International Crane Foundation has been working in North Korea for 8 years now.   (UPDATE:  See Comments below.)

Why is that relationship with North Korea very successful and what is the value?   The text of my email to The Sunday Edition follows info about the interview.

At bottom is Comment I sent to Daryl Copeland.   He is new to me, I will read his work.  I certainly liked what he said on The Sunday Edition  (I caught the last part).

The solutions to the problems we face are not military and bombing.

Rebuilding Canada’s foreign service after its “decade of darkness”.

Canada’s international reputation used to be as a middle power with a proud history of peacekeeping, and as a leader in environmental causes.

But according to former Canadian diplomat Daryl Copeland, the damage done to Canada’s global presence and influence under Stephen Harper’s Conservative government was profound — and it won’t be healed quickly.

We were always…seen as a helpful fixer, a provider of good offices, and a purveyor of fairly progressive ideas….[We] pretty much cemented for ourselves a place in the world as someone that others liked to have at the table. It was thought that we added value. Even if we couldn’t bring a great pile of guns or money to the game, we certainly brought a lot of talent. And that was widely appreciated, and under Mr. Harper, widely missed. – Former Canadian diplomat Daryl Copeland

Copeland spent 30 years as a diplomat, posted to Thailand, Ethiopia, New Zealand and Malaysia. He’s currently a senior fellow at the Canadian Global Affairs Institute, and a visiting professor at the Diplomatic Academy of Vienna and the author of Guerrilla Diplomacy: Rethinking International Relations. 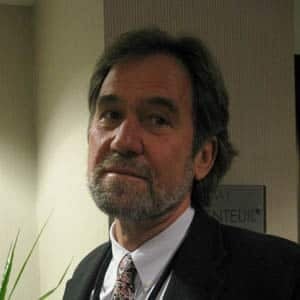 “You can’t call in an air strike on a warming climate…There are no military solutions to the most profound problems that are imperilling the planet. It’s got to be diplomacy,” says former diplomat Daryl Copeland. (Emily Chung/CBC)

Copeland says that while he’s encouraged by the steps the Trudeau government has taken, the “jury’s still out” on whether Canada will truly return to its traditional role as a peacekeeper.

He spoke to Michael Enright about foreign policy, what it will take to restore Canada’s global reputation and why today’s problems require diplomatic, not military, solutions.

Click the button above to hear Michael’s interview with Daryl Copeland.

THE EXAMPLE OF THE INTERNATIONAL CRANE FOUNDATION,  SENT TO THE SUNDAY EDITION

In response to the discussion about ties with North Korea, a specific example of the value of connection:

The International Crane Foundation’s presence on the Anbyon Plains of southeastern North Korea.

This posting by George Archibald nicely describes how programs that are mutually beneficial can flourish, even in countries under despotic leadership:

George is the co-founder of the Int’l Crane Foundation, a Nova Scotian by birth and American through work place (Bariboo, Wisconsin, habitat for whooping cranes).   George mentions that entry to North Korea is through his Canadian passport.

You may know his story, one of determination that the whooping cranes would not become extinct when their population was down to 25 individuals. Between whoopers in the wild and in captivity, the still-tenuous population now has more than 500 individuals, thanks to George’s drive and wisdom in working with people.

The Foundation’s mission later extended to include cranes on other continents – – incredibly beautiful birds might I add, most under danger of extinction. He works “on the ground” empowering local people to live, feed themselves, and in some cases re-learn cultural heritage in which cranes have a focal role.

Nesting grounds, migration routes, habitat – – the requisites that must be in place if the cranes are to survive extinction – – demand that people from various countries work together.   North Korea is included in that list. Red-crowned cranes need the wintering grounds provided by the Anbyon Plains, and in a condition that doesn’t poison them.

George’s description of the Foundation’s work in North Korea (began in 2008) (https://www.savingcranes.org/travels-with-george-north-korea-2013/ ) is testament to the strength in human will power, when it is intelligently, intuitively exercised.  Further, George’s great respect and love for people, whoever they are and wherever they live, is apparent in the description of the work in North Korea.

The particular “scientific” endeavor to save cranes is not “humanitarian” in the form of giving “aid” in the usual understanding of that word.

The particular endeavor serves science, it serves cranes and the environment, while simultaneously being highly humanitarian. The empowerment of individuals, even in North Korea, is desirable and possible.   It can happen through people who are not afraid to go there.

I believe it is through George’s great love of people (and cranes!) that he has been successful in convincing the leadership of North Korea to work with him and the Foundation, that the relationship would be mutually beneficial.   The relationship is in its 8th successful year – – proof enough.   (UPDATE:  see George’s input below in Comments.)

NOTE 1: The Foundation has a modest budget; George is a modest man.   He is 69 years old. Rich Beilfuss recently assumed the role of President and CEO. George remains extremely active in the work.

NOTE 2: I met George when he came to my hometown of Luseland, Saskatchewan. The area is a possibility for re-introduction of whoopers into the wild, into former nesting grounds. I subsequently travelled with a small group under George’s guidance to Bhutan where the Foundation has been active since 1996 to protect the wintering grounds of the black-necked crane.  I was indeed fortunate; it is a high-light in my life.

SENT  TO DARYL COPELAND, AUTHOR OF “GUERILLA DIPLOMACY”,  HEARD ON THE SUNDAY EDITION

Science Diplomacy for the Age of Globalization

I heard the end of your interview on CBC Sunday Edition, July 3.

“You can’t call in an air strike on a warming climate…There are no military solutions to the most profound problems that are imperilling the planet. It’s got to be diplomacy,” says former diplomat Daryl Copeland.

I am new to your work, look forward to reading it.

Michael Enright questioned the idea of working with countries like North Korea.

I emailed the Sunday Edition and posted on my blog to effect YES! Daryl Copeland is right and here’s an example to illustrate,   http://sandrafinley.ca/?p=16884

You may or may not know about the International Crane Foundation’s (ICF’s) very successful project in North Korea, began in 2008. Without diplomacy and a wise appreciation of the lives of people, it would not have been possible. It obviously contributes to solutions for environmental, species-extinction problems. It less-obviously contributes to the empowerment and fulfillment of North Koreans, the building of relationships between countries.

It is the story of George Archibald, the Canadian behind the ICF, the amazing story of the rescue-from-extinction of the whooping cranes, which became an international effort on behalf of other species of cranes, the environment, and humans.

There was not room in the message to The Sunday Edition, to elaborate on a similar story from Bhutan.   Through serendipity I was able to travel there with a group led by George. I stayed a couple extra days, had pre-arranged to meet with The Bhutan-Canada Foundation. That Foundation had been helping to bring education to people in remote and almost inaccessible villages in mountain valleys. You may know how welcome I was as a Canadian – – the people were so grateful for the help Canadians had been bringing, since the 1970s.   On a shoestring budget.   The bit of assistance provided by the Govt of Canada through the years was abruptly ended by the Conservatives under Harper.

It was senseless strategy, especially when those cuts are offset a billion times over by increases in the purchases of weapons of war like the F-35 stealth or other bombers at a price tag upwards of $30 billion. Not to mention the money that will go into ships that are equipped for and with killer technology. We have been sucked into the American military-industrial-government-university complex. Overtaken by corporate values and really stupid economic indicators (I am a graduate of a College of Commerce.)

While in Bhutan I was incredibly fortunate to also make a small foray into my motivating interest to get to Bhutan: work initiated by former King Jigme at the national and U.N. level, to replace faulty economic indicators used by the West with indicators based on outcomes like the health and happiness of the population and the environment – – identification and measurement of the factors that contribute to the outcomes they want as a society.

Canada has played a role: people from the Vancouver Island Health District went to Bhutan some years ago, to help them establish the baseline data for the project.

I was invited to a meal.   Among the guests were two deputy ministers (Economy and Education) and a Government employee in Environment. George’s “from the beginning” relationship with Bhutan is through a brother of these officials.

Hishey invited us to a family dinner. In my case, so I could pursue conversations about what are very destructive economic indicators in the West (in our ignorance).   I wanted to hear a bit about the experience of the Bhutanese in changing course.

Anyhow, there it is. Bless you for your work, your wisdom, and for speaking out.

2 Responses to “2016-07-03 . . . can’t call in an air strike on a warming climate…no military solutions to the most profound problems that are imperilling the planet. … International Crane Foundation in North Korea.”