Jan – –  Info below, the “how to obtain” for Community Theatres (and professional theatre).

Building the Wall will be produced in Ottawa by Horseshoes & Hand Grenades, playing November 30 – December 9 at The Gladstone Theatre.

Our upcoming production of Robert Schenkkan’s brand new play “Building The Wall” is quickly becoming one of the world’s hottest pieces of theatre, with  numerous productions planned for across the U.S., Europe, Mexico.

I sent an email to Schenkkan’s Agent to promote the idea that they get the play into community theatres, including in Canada.   The play needs to be seen by “People on the street”, and soon.  They were ahead of me.

“HOW TO OBTAIN” FOR COMMUNITY THEATRES,  BUILDING THE WALL

The play is taking off in the U.S. and in some other countries.  Goal is to reach as many people as possible.  Robert Schenkkan is Pulitzer Prize playwright.

Community theatre groups can obtain license to perform through

Scroll down here, on my blog page – there’s a picture from a production.  Schenkkan intentionally designed the play to be easily portable and accessible.

At least two people have approached the local community theatre group here, to see whether arrangements can be made for them to perform the play.  There is a donor for the performance cost, if the answer is “yes”.

Read story transcript   (the link lands you on the page for the full transcript for the April 21st episode.   The transcript for Schenkkan begins near the bottom of the page.   If you have any difficulty finding it, scroll to the top of this CBC page.  Near the top, find the links to the component segments.  The 3rd one is for the Schenkkan interview.)

Building the Wall, which is already one of the best-selling shows in the 27-year history of the Fountain Theatre in Los Angeles, was written in the space of a week in late October of last year.

“I was so outraged,” Schenkkan tells The Current’s Friday host Dave Seglins. “I was so concerned and the urgent need as an artist to respond to what I perceive to be an urgent crisis just took over.”

Schenkkan believes that playwrights have a responsibility in times of crisis. The Hillary-supporter thought the election would have turned out differently, yet he felt the U.S. had already crossed dangerous lines in the lead up to the election. 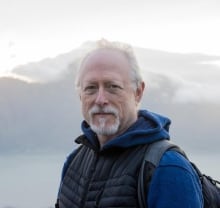 “I had been increasingly concerned about what I was hearing. It wasn’t just the language of the then-candidate Trump but it was also the way in which politicians, talking heads, correspondents, people who should know better were trying to downplay the seriousness of this,” Schenkkan says.

“They were constantly reassuring the American audience that well, he doesn’t really mean it, or hey it’s just words, or well don’t worry should in the unlikely event he becomes president, we will make sure nothing terrible happens.”

Building the Wall tells a cautionary tale through the characters of Rick, a white middle-class  prison warden, and Gloria, an African-American Professor. Rick becomes a prisoner himself for committing serious crimes involving prisoners at his private prison, and Gloria is tasked with understanding what led Rick to his present situation.The play tackles issues such as immigration, race and private prisons and the political choices that Schenkkan believes the U.S. will inevitably face in the next couple of years.

“Whenever a country has taken this unfortunate turn down a dark road, it has happened because individual citizens have yielded to the state of their own moral authority. The current President of the United States is not a Nazi, not remotely, he is not a even necessarily Republican or a Democrat — if anything he is an oligarch.” he explains.

“But he has definitely taken a page from the authoritarian playbook and he has done so very adroitly.” 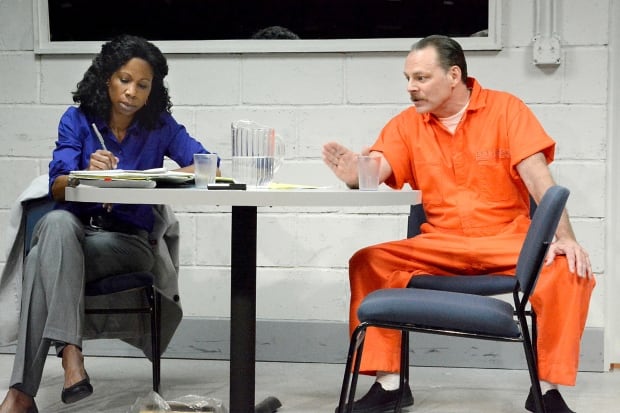 Schenkkan believes the U.S is in the middle of a dire crisis.Trump’s rhetoric and authoritarian tendencies, according to Schenkkan, are a threat to fundamental American values such as the separation of powers and freedom of press.

“I don’t see the political crisis right now …  as a struggle between left or right, or liberal or progressive or Republican or Democrat. What we’re experiencing is an attack, a concerted attack on fundamental American values,” he suggests.

But Schenkkan also hopes that his play will ignite a genuine dialogue in the U.S. across the political spectrum. His character Rick, is a Trump supporter. Schenkkan wanted to make sure he wasn’t one-dimensional.

“It’s all too easy to dismiss people you disagree with as foolish, or not having a grasp of the facts or being prejudiced or bigoted or whatever. That’s not helpful,” he tells Seglins.

“It’s not actually true necessarily for everybody and it was very, very important for me in this play that the character of Rick not be a stereotype and not play into liberal or progressive stereotypes about what these people are like or what they want.”

Building the Wall will be produced in Ottawa by Horseshoes & Hand Grenades, playing November 30 – December 9 at The Gladstone Theatre.

Listen to the full segment at the top of this web post.