Calls for a Public Inquiry into Montebello are certainly warranted but have fallen on deaf ears.  When you see the video footage it’s a little hard to swallow the explanations given in the article below.   The officials responsible “will not comment”.   /Sandra 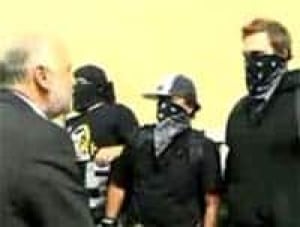 at the North American leaders summit in Montebello, Que.

However, the police force denied allegations its undercover officers were there on Monday to provoke the crowd and instigate violence.

“At no time did the police of the Sûreté du Québec act as instigators or commit criminal acts,” the police force said in French in a news release. “It is not in the police force’s policies, nor in its strategies, to act in that manner.

“At all times, they responded within their mandate to keep order and security.”

Police said the three undercover officers were only at the protest to locate and identify non-peaceful protesters in order to prevent any incidents.

Police came under fire Tuesday, when a video surfaced on YouTube that appeared to show three plainclothes police officers at the protest with bandanas across their faces. One of the men was carrying a rock.

In the video, protest organizers in suits order the men to put the rock down, call them police instigators and try unsuccessfully to unmask them.

Protest organizers on Wednesday played the video for the media at a news conference in Ottawa. One of the organizers, union leader Dave Coles, explained that one reason protesters knew the men’s true identities was because they were wearing the same boots as other police officers.

Coles said on Wednesday that the only thing he didn’t know was whether the men were Quebec police, RCMP or hired security officers.

“[Our union] believes that the security force at Montebello were ordered to infiltrate our peaceful assembly and provoke incidents,” said Coles, president of the Communications, Energy and Paperworkers Union.

Police said the three were told to monitor protesters who were not peacefully demonstrating to prevent any violent incidents, but they were called out as undercover agents when they refused to throw objects.

Protesters said they gathered to voice their concern about Canada losing control of its energy and water resources and borders. Others decried what they called a high level of secrecy at the summit.

The Quebec provincial police will not comment any further on the affair, a spokeswoman in Montreal said.

Quebec Justice Minister Jacques Dupuis was made aware of the news, but a spokesman from his office said he will not comment on the matter either.