I am especially upset when it is children who are affected by the deceits.   Upset (angry!) is the wrong word.   I am fueled to continue.

I  commented on the appended article in the Guardian,

and contacted the parties who have worked so tirelessly in the public interest, to thank them.

Moonbean says “Thanks to everyone for their courage . . .” (in fighting for integrity in science). Yes!   Many thanks to David Healy in this instance.

I see where journalist Alison Bass has been a persistent force in exposing the corruption.  Citizens have to know the names of the fraudsters; it’s the only way to hold them to account.

Pierre Boudoir comments “Isn’t this fraudulent and criminal behaviour? We can expect people to go to jail, right?”

Keller and GSK may not have put a bullet in anyone; their crime is worse and affects many more people. The only ones who will see that they are brought to justice are citizens.   The strength of the Comments on this article say to me that we have the capability, we have only to exercise it.

Propaganda (advertising, spin doctors) is a serious threat in today’s world.   Most of the large Universities (“scientists”, collaborators) play a significant role in “conditioning” students for corporate and Government purposes.   The public interest is lost.

It definitely takes courageous people within our institutions to stand up to the betrayal, and, journalists ready to go the extra mile.  It also takes active and vocal citizens to mobilize and bring the weight of our numbers to bear.

APPENDED, FROM THE GUARDIAN 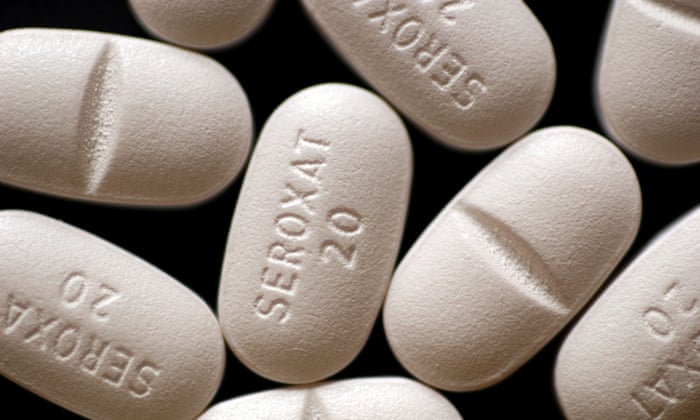 Paroxetine is sold as Seroxat in the UK and Paxil in the US. Photograph: Jack Sullivan/Alamy

An influential study which claimed that an antidepressant drug was safe for children and adolescents failed to report the true numbers of young people who thought of killing themselves while on it, re-analysis of the trial has found

Study 329, into the effects of GlaxoSmithKline’s drug paroxetine on under-18s, was published in 2001 and later found to be flawed. In 2003, the UK drug regulator instructed doctors not to prescribe paroxetine – sold as Seroxat in the UK and Paxil in the US – to adolescents.

But experts who have obtained the original data say the study is still referred to in the medical literature and needs to be retracted.

In their re-analysis of the trial, published in the British Medical Journal, they say the beneficial effects of paroxetine on young people were far less and the harmful effects far greater than the study suggested.

Out of 275 children and adolescents in the trial, 11 taking the drug and one in the group given a placebo developed suicidal or self-harming behaviour. The original publication of the study reported five on the drug and one on placebo. There were no reports of suicidality on a second drug, imipramine, which was also tested in study 329.

David Healy, professor of psychiatry at Bangor University in Wales, said it was hard to see how so many suicidal children could have been overlooked. “We think if you were to go in and look at this data, anyone without training will find there are at least of the order of 12 children becoming suicidal on this drug out of about 93 [who were given it],” he said.

“This is a very high rate of kids going on to become suicidal. It doesn’t take expertise to find this. It takes extraordinary expertise to avoid finding it.”

In an article published with the re-analysis, Peter Doshi, associate editor of the BMJ, said the new paper “has reignited calls for retraction of the original study, putting additional pressure on academic and professional institutions to publicly address the many allegations of wrongdoing.”

He said few trials had been as controversial as study 329, whose lead author was Martin Keller from Brown University. In 2002, the year after its publication, the US Food and Drug Administration said it should be considered a failed trial because the depressed adolescents taking the drug did no better than those on placebo.

In that same year, more than two million prescriptions for paroxetine were written for adolescents and children in the United States, on the back of an advertising campaign which claimed the trial had shown “remarkable efficacy and safety”. GSK was fined $3bn in 2012 for fraudulently promoting the drug.

“It is often said that science self-corrects. But for those who have been calling for a retraction of the Keller paper for many years, the system has failed,” Doshi writes. “None of the paper’s 22 mostly academic university authors, nor the journal’s editors, nor the academic and professional institutions they belong to, have intervened to correct the record. The paper remains without so much as an erratum, and none of its authors – many of whom are educators and prominent members of their respective professional societies – have been disciplined.”

The BMJ authors, led by Prof Jon Jureidini at the University of Adelaide, wrote to GSK in 2013 asking whether the company intended to re-analyse the data itself. They say GSK declined.

However, GSK did co-operate with the re-analysis by agreeing to post 77,000 pages of de-identified case reports from the adolescents in the trial on a website.

The BMJ paper is the first re-analysis of a drug study under a new initiative called Riat (Restoring Invisible and Abandoned Trials). Dr Fiona Godlee, BMJ editor-in-chief, said publication of the reanalysed data from study 329 “sets the record straight” and “shows the extent to which drug regulation is failing us”. She said it also showed that the public and clinicians did not have the unbiased information they needed to make informed decisions.

GSK stressed its commitment to transparency and its help for the researchers who re-analysed study 329. “Importantly, the findings from this team’s analysis appear to be in line with the longstanding view that there is an increased risk of suicidality in paediatric and adolescent patients given antidepressants like paroxetine,” it said.

“This is widely known and clear warnings have been in place on the product label for more than a decade. As such we don’t believe this reanalysis affects patient safety.”