Rule of Law » Corruption » 2017-11-01 Book: “Whitewash: The Story of a Weed Killer, Cancer, and the Corruption of Science” by Carey Gillam (glyphosate, roundup, Monsanto)

Hart writes:
Glyphosate is not necessarily the subject of a new crusade for me. But I do believe that family and friends should know about it. For their own and the health of their families. There are ways to reduce the risks.

The info about the chemical is particularly important in the EU right now.

The frightening part is the effects of lobbying and corruption that still prevents governments to take necessary actions.   See the short book review  . . .

Book review : “Whitewash: The Story of a Weed Killer, Cancer, and the Corruption of Science” 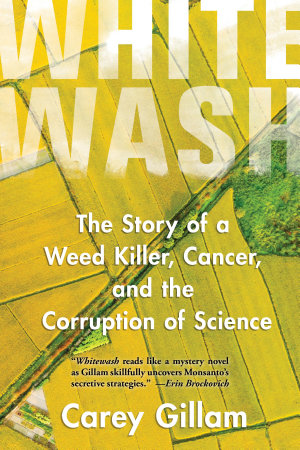 A few weeks ago I found myself sitting beside a retired chemical engineer at a reunion of my husband’s age-mates in Germany. I’m not sure what made the engineer decide to unleash decades worth of remorse about what his profession had done in the 1960s and 1970s, but that’s what he did.

He said that he, his company and colleagues around the world had knowingly produced many, many toxic chemicals that wound up in our homes, our foods, our bodies, and made us sick. Others they produced were so poisonous they would kill instantly, and were almost impossible to dispose of safely. Many are still in storage today.

I listened, amazed at his candour and aghast at what he was saying. I had just written a book about a fifty-year-old pulp mill in my home province of Nova Scotia in eastern Canada, and about successive waves of public protest over the dangerous chemicals it used and emitted, polluting air, water, and politics. The book also shows how the powerful pulp industry has shaped forest policies and practises in much of Canada, with its regime of clearcutting, planting of conifer monocultures, and then spraying these plantations with herbicides to kill off hardwoods that would compete with them.

The active ingredient in those herbicides is glyphosate. This is the weed-killer that the giant agrochemical and biotech company Monsanto put on the market in 1974 with the name “Roundup,” and complemented 20 years later with its genetically modified (GM) “Roundup Ready” crops that could be sprayed with the herbicide because they had been engineered to withstand it. Governments seemed convinced the weed-killer was safe; they had permitted its use around the world on fields of crops that we eat every day, and anywhere else that human beings want to wipe out plants that dare to put down roots where they are not wanted — on lawns, golf courses, gardens, parks, and playgrounds.

But glyphosate had long been controversial and I was curious as to what the chemist thought of it.

So I interrupted his Mea culpa about his own chemical sins and asked, “What about glyphosate? Is it safe?”

“It should be banned,” he said, without hesitating. “It’s poison.”

I wanted to ask him many more questions. Why, for example, did he (and many others) think glyphosate was dangerous, when the agro-chemical industry (and many others) argue that it is safe enough to drink and harmless to the environment? And why, if it really was harmful, did government agencies around the world approve it so that it has become the most widely used agro-chemical in human history?

Unfortunately, time ran out and I didn’t get to pose these questions.

Imagine my pleasure, then, when a couple of weeks later I learned there was a new book about glyphosate that might answer my questions. Entitled “Whitewash: The Story of a Weed Killer, Cancer, and the Corruption of Science,” it was written by a veteran journalist, Carey Gillam.

The book does not disappoint. Not only does it answer my initial questions, but it also raises and answers many more, and it does so dispassionately and meticulously. She draws on years of research and investigation, countless scientific studies, court documents, interviews with scientists, farmers and regulators, and her previous experience as a senior reporter with Reuters.

When she first started reporting on agriculture, Gillam — like most citizens in democracies — had a lot of faith in the government agencies whose job it is to protect consumers and ensure the safety of farm products and foods, assuming that they wouldn’t approve herbicides such as Roundup and the GM Roundup Ready seeds that Monsanto produced if they posed any risks. She even became a “fan” of Monsanto’s chief technology officer, and said she enjoyed her chats with “the affable Brett Begemann” who had risen through the ranks to become Monsanto’s president.

But, as time passed, and her research and reports began to expose doubts about GM crops and glyphosate-based herbicides, she discovered that Monsanto could also be far from affable. The company tried to have her editors take her off the beat and their surrogates engaged in smear campaigns.

Eventually, Gillam left Reuters and joined the non-profit, US Right to Know, with its stated goal of “pursuing truth and transparency in America’s food system.” Her book offers readers 251 pages of compelling evidence that there is an urgent need for just such truth and transparency, that glyphosate poses many risks for human health, farms, crops, soils and the environment, and that Monsanto and the agro-chemical industry have gone to extraordinary lengths and expense to hide these from regulators and the public.

We learn that in the mid-1980s, a decade after Monsanto began promoting glyphosate as the safest herbicide ever, the Environmental Protection Agency (EPA) in the United States classified the chemical as a “possible human carcinogen.” Then, in 1991, after “extensive input” from Monsanto, the EPA did an about-face, deciding there was “evidence of non-carcinogenicity for humans.”

Over the years, study after independent study found that glyphosate was linked with health problems, with cancers such as non-Hodgkin lymphoma, chromosomal damage in blood cells, endocrine disruption, kidney or liver disease, and hormonal changes, among others. The combination of other ingredients with glyphosate in herbicide formulas made it even more dangerous.

Then there were the giant superweeds that were springing up in fields of Roundup Ready crops, which were resistant to glyphosate. To try to get rid of them, farmers were being forced to go back to deep tilling and every greater use of herbicides, both of which were things Monsanto promised its GM seeds and herbicides would reduce.

Researchers also found that the use of glyphosate around conventional and GM crops weakened their root systems, making them more vulnerable to disease and crop failures, such as that which has devastated Florida’s citrus crops. One independent scientist who determined that glyphosate destroys soil health tells Gillam, “When you spray glyphosate on a plant it’s like giving it AIDS.”

Monsanto and the agro-chemical industry pushed back at every step, publicizing its own studies that did not have to go through a peer review, hiring ghost-writers and providing them with messages, engaging industry-friendly scientists to write industry-friendly papers, and attacking genuinely independent scientists who contradicted them, trying to discredit them. As Gillam documents so diligently, this pattern repeated itself over and over and over again, and continues today.

“So where, one might ask, are the regulators?” asks Gillam at one point. A good question that she answers with ,a litany of rock-solid examples of how regulators have failed the public when it comes to glyphosate-based herbicides, be it the Environmental Protection Agency or the Department of Agriculture or the Food and Drug Administration (FDA) in the US. Or the Federal Institute for Risk Assessment and Ministry of Food and Agriculture in Germany. And although she doesn’t focus on the Canadian Food Inspection Agency (CFIA), she does note that it did not require annual testing for glyphosate residues until 2017, after the research branch of the World Health Organization categorized glyphosate as “probably carcinogenic to humans.”

Gillam admits that the story of glyphosate, the sacrificing of public safety for corporate profits for agro-chemical giants and the corporate capture of regulatory agencies, is not a “feel-good story.” This is certainly true. Page after page detailing the perfidy of compliant politicians and scientists, and the silencing of honest researchers within regulatory agencies, can be hard on the soul. It challenges head-on the myths that Monsanto (which the German giant Bayer is trying to take over) and others in the business of profiting from pesticides and GM crops have spread so effectively that their mission is to feed the world, something one senior scientist tells Gillam is “a bunch of garbage.”

At the same time, this book is hard to put down, as fast-paced and full of intrigue as any thriller, and it does offer glimmers of hope. After the World Health Organization labelled glyphosate a probable carcinogen, and despite the backlash from industry, lapdogs in regulatory agencies and even some media, many people believing their cancer came from exposure to glyphosate decided to take Monsanto to court. This brought to light damming documents that reveal still more of the subterfuge that surrounds glyphosate.

One professor emeritus of plant pathology tells her, “Future historians may well look back on our time and write about us … how willing we were to sacrifice our children and jeopardize future generations based on false promises and flawed science just to benefit the bottom line of a commercial enterprise.”

As Gillam notes, some believe that the chemical may turn out to have been worse than its poisonous predecessors — DDT and Agent Orange.

Her work on glyphosate leads her to conclude that “…when powerful corporations control the narrative, the truth often gets lost, and it’s up to journalists to find it and bring it home.”

This is exactly what Carey Gillam has done masterfully in this must-read book.