The connection to Canada – –   see the paragraph that starts with Last year, while on tour in Canada. . . . 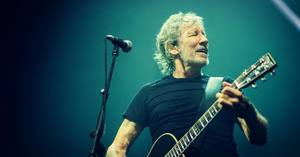 Legendary musician Roger Waters is in Ecuador to help local Indigenous and farmer communities force Chevron to clean up its 1,000 toxic waste pits, such as the one pictured. 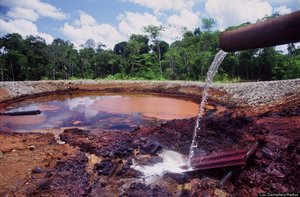 NEW YORK, Nov. 19 /CSRwire/ – Roger Waters, the founder of Pink Floyd currently touring Latin America to sold-out stadiums, is arriving in Ecuador today to bear witness to Chevron’s “Amazon Chernobyl” disaster and to support Indigenous peoples and farmer communities who are fighting to force the oil giant to pay a landmark $12 billion liability to be used to clean up the world’s worst environmental disaster.

“I am honored to come to Ecuador to see the environmental damage firsthand and to listen to my brothers and sisters in the Amazon who have taken on a true corporate monster in Chevron,” said Waters, who recently won a humanitarian award from the city of Buenos Aries. (See here.) “Chevron must clean up the disaster it caused in Ecuador and do so immediately. Chevron shareholders must recognize this is a humanitarian disaster and act to hold Chevron management accountable for its toxic dumping and attempts to evade court judgments.

“I am also here to support my friend Steven Donziger, the American lawyer for the Ecuadorians whom the company has targeted with a demonization campaign designed to intimidate supporters and leave the Ecuadorians without legal counsel,” Waters added. “I stand by Steven and all human rights defenders in Ecuador and around the world who get attacked by large corporations who commit wrongdoing.”

Carmen Cartuche, the President of the Amazon Defense Coalition (the group hosting Waters), said: “We are honored and privileged to be hosting legendary artist and musician Roger Waters on our ancestral lands. Mr. Waters not only has been an inspiration to millions of people around the world, but to those of us in Ecuador he has been a supporter for many years and we are deeply grateful for his solidarity. We look forward to telling Roger the truth about Chevron’s ongoing destruction of the environment and about the company’s crimes and fraud committed on our sacred lands.”

Waters was the creative force and principal lyricist for Pink Floyd from 1968 to 1983 in one of the most successfully runs of a rock band in history. With Waters as the driving force, Pink Floyd produced the famed Dark Side of the Moon (1973) and The Wall (1979), among other successful albums. Touring later as a solo artist, Waters later broke the record for the highest grossing tour in history for his spectacular Wall Live tour in 2010.

In Ecuador, Waters will visit in an area of the Amazon rainforest mired in a humanitarian crisis. Chevron’s operational area in Ecuador – roughly the size of Rhode Island and comprising 400 production sites – is poisoned with life-threatening toxins and cancer rates have skyrocketed, claiming hundreds and possibly thousands of lives. One noted academic predicts 10,000 people in the area will die of cancer in the coming years because of Chevron’s failure to clean up its pollution. Several community leaders in the area have succumbed to cancer recently, including legendary nurse Rosa Moreno.

Waters will visit the Ecuadorian town of Lago Agrio, which means “Sour Lake” in English. Located on Indigenous Cofan territory, Lago Agrio was built by Chevron’s predecessor company Texaco in the 1970s and named after its headquarters in Texas.  The Cofan, once a thriving band of 15,000 people, have been completely displaced by Chevron’s oil production with their traditional culture of hunting and fishing largely decimated. Chevron’s first well in Ecuador — known as Lago 1 — was built on Cofan territory and caused extensive pollution to a nearby farm and stream, according to court documents.

Waters has been a longtime supporter of the five Indigenous groups and 80 farmer communities in Ecuador who originally brought the pollution case in 1993 in U.S. courts. Chevron later shifted the case to Ecuador, but then lost a trial there based on 64,000 chemical sampling results, extensive witness testimony, and 105 expert evidentiary reports. The Ecuador verdict has been affirmed by four layers of courts in the country and 17 separate appellate judges. (See this summary of the evidence against Chevron.)

Last year, while on tour in Canada,

Waters attended court proceedings in Toronto to support the Ecuadorians in their attempt to seize Chevron assets to force compliance with the Ecuador court judgment. Chevron has an estimated $15 billion worth of assets in Canada, where it has come under sharp criticism for using its local subsidiary as a vehicle to send billions of dollars of annual payments to foreign governments as part of an apparent tax avoidance scheme. (See this summary of Chevron’s tax avoidance.)

Last week, Waters spoke to an academic conference in Alberta on Indigenous rights and the environment that focused in part on the litigation against Chevron. The pollution case – the first to result in a large environmental judgment against a U.S. oil company out of Latin America — was filed 25 years ago this month in U.S. federal court in New York before Chevron moved it to Ecuador.

When the evidence mounted in the Ecuador trial, Chevron sold its assets and threatened the Indigenous groups with a “lifetime of litigation” if they persisted. Chevron also hired 60 law firms to fight the Indigenous groups and launched an avowed “demonization” campaign targeting their lawyers. Donziger, a sole practitioner and graduate of Harvard Law School, has borne the brunt of Chevron’s attacks.

In the meantime, Chevron has suffered significant legal setbacks. The Supreme Court of Canada ruled unanimously in 2015 that the Ecuadorian communities could try to seize Chevron assets in that country, denying a Chevron jurisdictional challenge. The Ecuadorians also have won two unanimous decisions from the Ontario Court of Appeal denying other Chevron attempts to block the case. (See here for background on the Canada litigation.)

At the conference in Alberta two weeks ago, Waters criticized Chevron for what he called the “despicable” treatment of the Ecuadorian communities and their lawyers.

“We cannot allow Chevron to destroy Steven Donziger and 60,000 people in Ecuador,” Waters said. He later described the case against Chevron “as a matter of life and death for thousands of people” and said Chevron’s “ad hominem attacks against the Ecuadorians and Steven Donziger are utterly despicable.” Waters received a standing ovation after he talked, which took place via Skype from Santiago, Chile. (See here for studies documenting high cancer rates where Chevron operated.)

Chevron’s troubles from its Ecuador liability also have produced consternation in the financial markets.

Thirty-six Chevron institutional shareholders recently sent a letter to Chevron CEO Michael Wirth criticizing his mishandling of the litigation and asking that he explore a settlement. In the meantime, two shareholder resolutions relating to Wirth’s mishandling of the case received overwhelming support at the company’s 2018 annual meeting. (See here.)

For the last several months, Waters has been touring in Latin America while playing to large audiences in stadiums in Rio de Janeiro, Sao Paolo, Buenos Aries, Montevideo, Santiago, and Lima. He plays in Bogota on Wednesday night before closing his 18-month world tour in Costa Rica and Mexico. He previously played several cities in the United States, Canada, Europe, Russia, Australia and New Zealand.

For more from this organization: