There is a gate at our ears.  It shuts when certain words approach.  For my Mother,  the F-word rolls a cement gate across her ears.  For my uncle, the word “socialist” rolled a gate across his ears.   I wish that the this Web Site had named itself something different!

World Socialist Web Site International Editorial Board chairperson David North called January 16 for the formation of an international coalition of socialist and anti-war websites and journalists to counter Internet censorship.

North issued the call during a livestreamed webinar with journalist Chris Hedges, Organizing Resistance to Internet Censorship. The webinar attracted a substantial global audience and was viewed more than 15,000 times on Facebook and YouTube in the 24 hours after it aired. A statement from WikiLeaks founder Julian Assange supporting the event was read during the broadcast.

“A coalition needs to be formed to rigorously defend internet freedom, net neutrality, to organize the defense of both websites and individuals who come under attack,” North said. He urged participation in the coalition of all “those who are committed to the fight for socialism and opposition to war,” adding, “The World Socialist Web Site and the International Committee are willing on this principled basis to work with those who understand the critical issues involved.”

Full video of the webinar “Organizing resistance to Internet censorship”

The discussion between North and Hedges explored the political context of the efforts to censor the Internet and abolish net neutrality, including the historic levels of social inequality. Both North and Hedges stressed the inseparable connection between war and the destruction of democratic rights, including free speech.

Hedges stated, “Corporate capitalism, globalization, neo-liberalism, whatever you want to call it, is in crisis. First of all, the ideology itself has lost credibility. It no longer holds any currency across the political spectrum. It has been exposed as a lie… The ruling elites are frightened because they watched the political charade that they had set up, in both the Republican and Democratic Party, where the leadership, whether it was the Bush dynasty or the Clinton dynasty, or Barack Obama, have all been servants of the corporate state.”

North and Hedges also examined the pretexts used to justify the suppression of free speech and discussed political strategies to defend democratic rights, including the need for any such movement to be independent of the Democratic Party.

“Of course, the elites seek and have been quite successful at it, channeling energy back into a dead system, i.e., the Democratic Party,” Hedges said. “And this was why, not that he cared or that it mattered, I would not endorse Bernie Sanders because all of that money and energy, remember he even used the word ‘revolution,’ ended up in him running around the country telling everyone to vote for Hillary Clinton.” 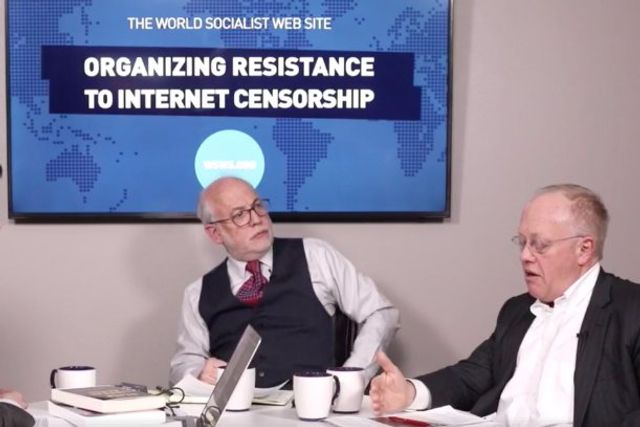 North stressed the importance of a free and open Internet for the building of an international revolutionary movement of the working class. “Above all we want to defend Internet freedom because we believe that the need for the development of an understanding of the crisis of capitalism, the fight for a revolutionary program is the most critical issue.”

In the course of the event, North reviewed the WSWS’s campaign against censorship of left-wing and anti-war websites, which began last year after the WSWS noted a significant decline in its own referrals from Google search results.

This decline was not the accidental outcome of an algorithm update, North explained, but was an intentional effort to block access to websites that published anti-war and anti-capitalist content. Out of 150 top search terms that previously directed Google users to the WSWS, including “socialism,” “Trotskyism,” and “Russian Revolution,” by June, 145 no longer did so.

“[C]ritics of capitalism, critics of imperialism, critics of the structure, such as myself,” Hedges said, “have been pushed to the margins, out of mainstream publications like the New York Times, where I worked for 15 years. Now, what we’re seeing in essence is that they no longer have a counter-argument to make that anybody is buying. So these marginalized critics—the World Socialist Web Site will print critiques of capitalism, lift up the abuse of the working class, as will a handful (we’re not talking about many) of sites; Counterpunch is very good, Alternet—they are being targeted because the ruling elites now find these critics to be dangerous and potent.”

The discussion drew messages of support from Assange, documentarian John Pilger and anti-war activist Cindy Sheehan which were read out during the broadcast.

Assange, who has been trapped in the Ecuadorean embassy in London for five and a half years, said he “commended the WSWS” for the event. He noted the danger that the Internet poses to the ruling elite, while warning about their efforts to control the expression of ideas online.

“While the internet has brought about a revolution in people’s ability to educate themselves and others, the resulting democratic phenomena has shaken existing establishments to their core,” Assange said. “Google, Facebook and their Chinese equivalents, who are socially, logistically and financially integrated with existing elites, have moved to re-establish discourse control. This is not simply a corrective action. Undetectable mass social influence powered by artificial intelligence is an existential threat to humanity.” (Read Assange’s full statement here)

Pilger pointed to the mainstream media’s role in justifying censorship of the Internet: “Dissent once tolerated in the mainstream has regressed to a metaphoric underground as liberal capitalism moves toward a form of corporate dictatorship. This is an historic shift, with journalists policing the perimeters of the new order. Witness the anti-Russia hysteria and the #MeToo witch-hunts, especially in liberal newspapers such as the Guardian and the New York Times. With independent journalists ejected from the mainstream, the world wide web remains the vital source of serious disclosure and evidence-based analysis: true journalism.”

Sheehan’s statement explained that the ruling class was attempting to silence oppositional voices online in order to stampede the American population into supporting war.

“[T]he national security state is devising more and more ways to not only suppress dissent, but guide internet users to think the way the empire wants us to think: The owner of the largest social media site has brazenly admitted as such with surprisingly mild, if any, outrage against it (present company excluded). And, hey, if propaganda isn’t working fast enough to have us marching in lockstep with the war machine, a very convenient, yet fake, ballistic missile warning to the people of Hawai’i might do the job?”

Go to endcensorship.org to view the full discussion and join the fight against Internet censorship.