Journalists and press freedom groups reacted with alarm on Thursday after the Trump administration announced new charges against Julian Assange, the WikiLeaks leader, for publishing classified information, in a case that legal experts say takes direct aim at previously sacrosanct protections for the news media.

In indicting Mr. Assange for obtaining, accepting and disseminating classified materials, the Department of Justice opened a new front in its campaign against illegal leaks. While past cases involved government employees who provided material to journalists, the Assange indictment could amount to the pursuit of a publisher for making that material available to the public.

“It’s not criminal to encourage someone to leak classified information to you as a journalist — that’s called news gathering, and there are First Amendment protections for news gathering,” said Theodore J. Boutrous Jr., a lawyer who frequently represents media organizations like CNN. “The ramifications of this are so potentially dangerous and serious for the ability of journalists to gather and disseminate information that the American people have a right to know.”

Federal prosecutors under President Trump have drawn criticism for extending a crackdown on leakers that had ramped up during President Barack Obama’s administration. The indictment of Mr. Assange — which related to WikiLeaks’ publication of secret documents leaked by Chelsea Manning, a former Army intelligence analyst — struck some experts as a grave escalation.

“It is one thing to charge a government official who has sworn an oath not to disclose classified information,” said Matthew Miller, who served as the Justice Department’s chief spokesman under Mr. Obama’s attorney general, Eric H. Holder Jr. “It’s another thing to charge someone outside the government who published information or solicited information, which is something that reporters do all the time.”

The charges against Mr. Assange are likely to face a challenge on First Amendment grounds. And journalists’ use of illegally obtained materials has been upheld in Supreme Court cases. But Mr. Miller said prosecutors had now skated to the edge of criminalizing journalistic practices.

“The Espionage Act doesn’t make any distinction between journalists and nonjournalists,” Mr. Miller said, referring to the law that Mr. Assange is accused of violating. “If you can charge Julian Assange under the law with publishing classified information, there is nothing under the law that prevents the Justice Department from charging a journalist.”

A deeply divisive figure, Mr. Assange is in some ways an unlikely martyr for press freedoms. A crusader for radical transparency, he is faulted by many American liberals for releasing hacked emails from the Democratic National Committee at the height of the 2016 presidential race.

“The calculation by the Department of Justice is that here’s someone who people don’t like,” Mr. Boutrous said. “There’s a real element of picking the weakest of the herd, or the most unpopular figure, to try to blunt the outcry.”

Justice Department officials on Thursday cited Mr. Assange’s mixed reputation as they tried to reject the notion that they were interfering with the free press. 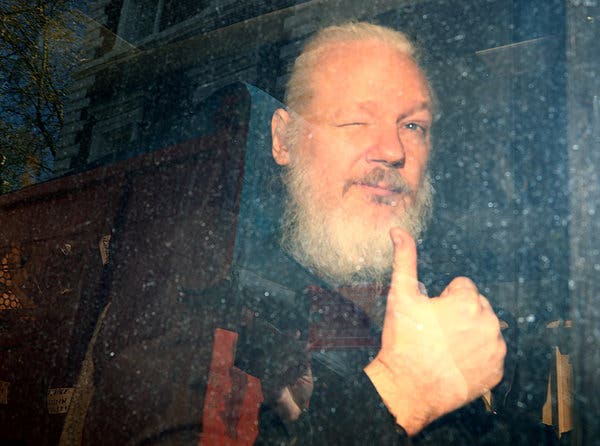 Julian Assange, the WikiLeaks leader, after his arrest in London last month. New federal charges against him are likely to be challenged on First Amendment grounds.CreditHannah McKay/Reuters

“The department takes seriously the role of journalists in our democracy, and we thank you for it,” John Demers, the head of the department’s National Security Division, said at a briefing with reporters. “It is not, and has never been, the department’s policy to target them for reporting.”

Still, press advocates were quick to condemn the Justice Department on Thursday. The American Civil Liberties Union called the indictment “a direct assault on the First Amendment.” The Reporters Committee for Freedom of the Press described it as “a dire threat.”

Dean Baquet, executive editor of The New York Times, said in a statement: “Obtaining and publishing information that the government would prefer to keep secret is vital to journalism and democracy. The new indictment is a deeply troubling step toward giving the government greater control over what Americans are allowed to know.”

Alan Dershowitz, the Harvard lawyer who has been a recent ally of Mr. Trump, said the case against Mr. Assange was “really the first time since the Pentagon Papers that the government has gone after publishers.”

“We all think there’s a difference between The New York Times and Assange from a practical point of view, but from a constitutional point of view, it’s hard to find that difference,” Mr. Dershowitz said. “They’re both publishing classified, stolen material.”

“This is analogous to if The New York Times and The Washington Post had been prosecuted after publishing the Pentagon Papers,” Mr. Dershowitz added, referring to the top-secret report on Vietnam whose publication in 1971 was upheld by the Supreme Court. “It’s a very, very frightening development.”

But Asha Rangappa, a lawyer and former F.B.I. counterintelligence agent, said she believed that the Justice Department had made a crucial distinction between Mr. Assange’s activity and the work of traditional journalists.

“He wasn’t simply a passive recipient of classified information; he actively participated in the breaking of the law,” Ms. Rangappa said. She added that Mr. Assange’s efforts to help his source, Ms. Manning, illegally obtain documents amounted to “aiding and abetting the criminal act itself.”

“That is a meaningful distinction from a bona fide news organization that truly has a public interest goal,” Ms. Rangappa said.

Seymour Hersh, the investigative journalist who exposed the My Lai massacre during the Vietnam War and misconduct by the C.I.A., among other revelations, wrote in an email that the move against Mr. Assange was troubling.

“Today Assange,” Mr. Hersh wrote. “Tomorrow, perhaps, The New York Times and other media that published so much of the important news and information Assange provided.”

A version of this article appears in print on May 23, 2019, on Page A8 of the New York edition with the headline: ‘That’s Called News Gathering’: Charges Alarm Advocates of Press Freedom.