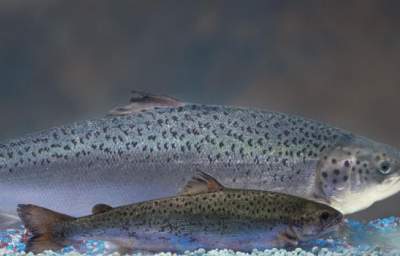 (from Nation of Change)

The very genetic coding of the planet is no longer held sacred, according to the United States Food and Drug Administration. The agency is now pushing for the release of genetically modified salmon called ‘frankenfish’ to be unleashed across the globe, threatening the genetic integrity of the entire animal kingdom.

Mutated by scientists to grow twice as fast as a normal salmon through the manipulation of the animal’s genetic code, the genetically modified salmon created by the company AquAdvantage was actually blocked for approval by Congress back in 2011 due to serious health concerns. In the report regarding the ban on the approval of the genetically modified salmon by Huffington Post, it is quite clearly spelled out how the FDA-backed mega company AquaAdvantage only cares about losing investors and profits — not the serious public health concerns.

Health Not a Priority: Genetically Modified Salmon Maker ‘Frustrated‘ Salmon Not Yet Unleashed Due to ‘Loss of Investors’

As the report details, AquaAdvantage head Ron Stotish had this to say about being blocked due to serious health concerns:

“He said, he is frustrated by the delay and has lost investors in his business…”

Poor Ron Stotish! This chief executive has lost investors! Never mind the fact that the GM salmon could proverbially ‘muddy’ the genetic ‘waters’ of nature, or cause unknown health issues in humans. No, that isn’t important. What’s important to Mr. Stotish is the loss of profits. Since 1991, AquaAdvantage pumped in over $67 million to develop this fish, and they are not going to stop fighting until it’s on your dinner plate.

Thankfully, Stotish has the FDA to proclaim how great genetically modified food is as usual. Ignoring the 37 diseases that Roundup is associated with and discounting all of the information linking GMOs to health concerns is ‘scientific’, after all. Even mild critics of the ‘frankenfish’ salmon argue that it could at the very least cause allergies in humans, let alone be unleashed into the wild and disrupt the genetic coding of fish for all future generations.

The genetically modified salmon contains both a gene from the Pacific Chinook salmon that causes the fish to produce growth hormone 24/7, as well as a gene derived from an eel-like fish that triggers the hormone production. This causes the fish to reach around 6.6 pounds instead of the average 2.8 pounds. It also reaches 24 inches instead of 13.

The fact of the matter is that numerous heads of the FDA have a deep (or even current) history with biotech giants like Monsanto. People like Michael R. Taylor, the current Deputy Commissioner for Foods at the FDA, was actually a Vice President at Monsanto. This is the same man that led an assault and subsequent shutdown of the largest organic peanut butter factory. Meanwhile, tumor-linked GMOs roam free.

And so will this genetically modified salmon unless activism prevails against the FDA and AquaAdvantage.

But in the event that these GM salmon are unleashed, how will you know if you’re eating GM salmon? After all, US citizens eat more than 650 million pounds of salmon each year. As you may have guessed, the FDA says that the genetically modified salmon does not need to labeled as it’s the ‘same’ as regular salmon.

The fact of the matter is that this criminal organization must be stopped before the genetic coding of plants and animals worldwide is irreversibly contaminated. As biotech corporations with billions in funding begin to alter animals after already manipulating 80 plus percent of just about every staple crop, the fight for genetic preservation will continue.