BlackRock threatens to stir shareholder rebellions, warning UK companies they must match boardroom pay rises with that of workers 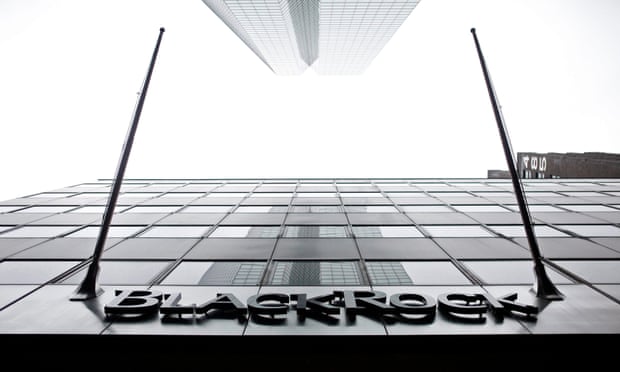 BlackRock has said it would only approve salary rises for top executives if firms increase workers’ wages by a similar amount. Photograph: Eric Thayer/Reuters

The world’s largest asset manager is threatening to unleash a fresh wave of shareholder rebellions in the UK unless Britain’s largest companies rein in excessive boardroom pay.

BlackRock is demanding cuts to director pension entitlements and an end to huge pay rises as UK companies prepare to put their latest pay deals to shareholders.

In a letter to the bosses of more than 300 UK companies, the US fund manager said it would only approve salary rises for top executives if firms increase workers’ wages by a similar amount. It is a significant intervention from a company which is a shareholder in every business listed on the FTSE 100 index. BlackRock has $5.1tn (£4.2tn) of investments and describes itself as the world’s largest fund manager.

(UK bosses make more in two and a half days than workers earn all year.)

The company’s head of investment stewardship in Europe, Amra Balic, said in the letter that a failure to meet the standards outlined by the fund manager would call into question the quality of the board.

“We consider misalignment of pay with performance as an indication of insufficient board oversight, which calls into question the quality of the board. We believe that shareholders should hold directors to a high standard in this regard.”

About half of Britain’s biggest quoted companies face binding shareholder votes on their pay plans in 2017. One of the issues highlighted by BlackRock is the gap between the pay rises handed out to the most senior executives, and those awarded to the rest of the workforce.

The fund manager said: “In case of a significant pay increase year-on-year that is out of line with the rest of the workforce, BlackRock expects the company to provide a strong supporting rationale. Large increases should not be justified principally by benchmarking.”

The letter to bosses, first reported in the Sunday Times, echoes investor rebellions from 2016. Last April, almost 60% of shareholders voted against a £14m pay package for the chief executive of BP in a year in which it reported record losses, cut thousands of jobs and froze its employees’ pay. Also, more than 50% of investors voted against pay deals at the medical equipment group Smith & Nephew, as shareholders demonstrated their unwillingness to tolerate boardroom excess.

Excessive boardroom pay has moved up the national agenda since the financial crisis of 2008 and prime minister Theresa May stated an ambition to crackdown on poor corporate governance in the UK. Last week BlackRock became the largest shareholder in Lloyds Banking Group after the government further reduced its stake in the bailed-out bank.

Stefan Stern, director at the High Pay Centre, welcomed the intervention from BlackRock but said more needed to be done to tackle excessive boardroom pay.

“There is a systemic problem in top pay. The system is failing and one of the issues is the big asset managers not being effective in helping to restrain those big packages. As a rule, they have not stepped up, so BlackRock are absolutely right to engage in this way.”

Stern said the government, as well as the wider public, also had a bigger role to play in calling for change.

Blackrock said that annual shareholder votes, where the results are not binding, should not be used to justify pay increases. “Pay should only be increased each year, if at all, at the same level of the wider employee base, and in line with inflation,” the company said.

One of the first companies to put their pay proposals up for the shareholder vote will be Imperial Brands at its annual general meeting on 1 February. David Haines, chairman of the tobacco company’s remuneration committee, is recommending a hike in the pay package of its chief executive Alison Cooper, from £5.5m in the last financial year to a maximum of £8.5m in the current financial year.

A spokesman for the company said the proposed hike in pay reflected the committee’s concerns about the company’s ability to “retain and attract executive talent”, adding that Cooper had achieved shareholder returns of more than 170% since she took the top job six years ago.

The gears of the merry-go-round mesh.  On the merry-go-round you sing one song, “We are worth it!”.  Support your fellow rounders – – tie them to the same chicanery.  Otherwise the merry ride is threatened.    In Canada, a former federal cabinet minister earns more than a million dollars annually just from the Boards she sits on.  Board-to-board you are circulating in a close group of mutually-reinforcing individuals that includes the government officials who got onto the merry-go-round by singing “You are worth it”.  Boards assess compensation of their Executives with executives of other companies.   Not one board will break with the status quo.    They would be black-balled.  It would affect their access to the information that flows in their circles – – which is valuable.  Can they even be said to set the compensation of their own Executives?  CEO’s and VP’s run the Boards – – they by-and-large control the information received by the Board, who are too busy anyway, hopping from one board to another,  always “meeting”.  Boards of Directors (overlapping and the opposite of diverse) would never assess the equity of internal compensation packages, top-to-bottom.  It is too threatening.  And of course, “not their job”.   Sooo – – carry on with the revolt.