This news will make your heart sing!    Hallelujah!

“We invite you to question why it is us—and not the war makers and profiteers—that are on trial,” protesters had said.

Five men and three women said they had blocked road to stop sale of weapons to regimes accused of human rights abuses    ….   continued below.

(Much of this comes down to ENFORCEMENT of  THE LAW.)

from William Hartung “Prophets of War: Lockheed Martin and the Making of the Military Industrial Complex.

Other nations taking action against them. What’s wrong with us?

Plus letter to Dalhousie Univ, recipient of LM money.

The Guardian, The Independent in the U.K.  and Common Dreams,  URLs for three versions of the story:

The Guardian version of the story: 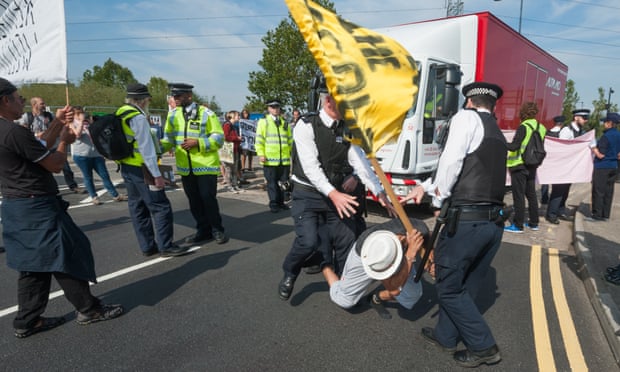 Police move a protester from the road as a truck tries to make a delivery to the DSEI arms fair in London. Photograph: Peter Marshall/Demotix/Corbis

A court has dismissed charges against protesters who blocked the road outside a major London arms fair, after they argued that they acted to stop greater crimes being committed using weapons bought in the UK.

District judge Angus Hamilton, sitting at Stratford magistrates court, said the defence had presented clear and credible evidence that illegal activity had been conducted at the Defence Systems and Equipment International (DSEI) arms fair in previous years, and that police arresting the activists had failed to investigate to ensure it was not happening again.

Five men and three women had been charged with wilful obstruction of the highway after attempting to block military vehicles from entering the ExCel centre in Docklands, east London, in September. They said they had acted to stop the sale of weapons to regimes accused of human rights abuses, including Bahrain, Saudi Arabia and Israel.

Other non-direct actions, such as writing to MPs, had failed to block arms sales to authoritarian regimes, the defence claimed, with support from expert witnesses from Corruption Watch UK, the Bahrain Institute for Rights and Democracy (Bird), and Amnesty International.

The prosecution lawyer had argued that no arms sales would be blocked by the demonstration and that protesters could have no idea where the arms were going. She said that if the eight were acquitted, protesters could resort to more violent direct actions in the name of stopping the arms trade. This argument was dismissed by the judge.

Aali, a Bahraini refugee granted asylum in Britain after he was tortured in his home country for taking part in protests against the regime, said he was delighted with the ruling.

“I was unjustifiably imprisoned in Bahrain on an unfair trial and today I have seen a day of justice,” he said. “The fact that the weapons which were used to kill and torture people in Bahrain and Saudi is something that the court has seen to be legitimate, that there are violations committed by these totalitarian regimes. My role in taking direct action was important in circumstances where legal remedies were exhausted.”

Mengesha said the ruling confirmed everything the protesters knew. “We already knew about the illegality at DSEI but it’s great to see it publicly accepted. At the start of the case it was one where they would be trying the defendants; by the end it seemed that we tried Saudi, Turkey, Bahrain and the DSEI arms fair.”

Butler had just returned from Kurdish areas of Turkey, which was an international partner of DSEI 2015, when she was arrested outside the arms fair. “At the time, and even right now, Turkey has been conducting massacres of civilians in Kurdish towns and cities,” she said. “I blockaded DSEI arms fair to try to prevent greater crimes from being committed by the Turkish state.

Sayed Ahmed, director of advocacy at Bird and one of the expert witnesses called on behalf of the defence, said: “Sending arms to totalitarian regimes which are certainly used to repress the people in their millions and also to cause wars in the Middle East region is not acceptable.

“The direct actions by the activists was clearly needed as legal remedies didn’t find a way to stop the UK government in arming one of the most repressive regimes on earth.”

A spokesperson for DSEI said the fair takes legal compliance seriously and representatives from HMRC, the Department for Business and other government agencies were present in the run up and throughout the 2015 event.

“They had free and totally unrestricted access to all exhibitors to in order to undertake checks that all equipment, services, documentation and any other forms of promotion complied with UK, EU and international law,” the spokesperson said.

“As a result of this close cooperation, and the processes put in place, compliance regulations were not breached at DSEI 2015.”

The protests in Canada mount over the $11 billion armaments contract with Saudi Arabia.     – –  see the “Comments” below.