Rule of Law » Anti-SLAPP & SLAPP, Corporate & Individual manipulation of Justice system » 2016-07-29 ‘What law am I breaking?’ How a Facebook troll came undone

‘What law am I breaking?’ How a Facebook troll came undone

Of the millions of perpetrators of online harassment, Zane Alchin of Sydney is among the few to have been prosecuted – and his victim says it took a media campaign

It began with a rap lyric.

“Type of girl that will suck you dry and then eat some lunch with you,” read Olivia Melville’s bio on Tinder – a Drake quote, from the Canadian rapper’s song with Nicki Minaj.

Melville, then 23, was on the other side of Sydney from Chris Hall when he came across her profile. He posted a screenshot publicly to his Facebook page.

It was the kind of blanket, banal sexism that weighs down the internet in steady streams: arguably too common, too tired to be truly offensive to any woman online.

Melville was alerted to Hall’s post by a friend. She chose to respond.

“I wasn’t aware I had to put my CV in my Tinder bio,” she wrote on 25 August last year, sharing Hall’s post to her own profile. “Shame on you, Chris Hall, for your ignorance of Drake and a good taste.”

Her friends rallied in the comments thread in support. So did his.

The back-and-forth between the two groups was antagonistic, at times aggressive – but, even so, the comments by Zane Alchin were an immediate escalation.

“Please you cunts deserve to be taken back to the 50s were [sic] you wil learn to know your role and shut your damn mouth.

“Do me a favour go home and slap your mother obviously your father never did it enough.

“I’d rape you if you were better looking but I wouldn’t fuck you.”

Over a period of about two hours, Alchin – now 25, a labourer who lives with his parents in Caringbah in southern Sydney – left 55 posts, many of them referring to violence and rape.

That last comment was addressed not to Melville but her friend, Paloma Brierley Newton, now 24, who had come to Melville’s defence. Their interaction came to dominate the thread; at one point Brierley Newton told Alchin she would report him to police “if you keep threatening me with rape”.

“What law am I breaking?” he responded. “I’m not the one out of the fucking kitchen.”

Eventually Brierley Newton blocked Alchin, meaning his comments were no longer visible to her. He kept posting.

Brierley Newton shared screenshots of their back-and-forth on her own Facebook page.

“This kind of behaviour is what we call ‘normalisation of violence against women’ and it is really, really scary and damaging,” she wrote. “… Every time you ‘playfully’ tell a woman to get back in the kitchen, every time you smack a girl on the bum because it’s funny, every time you make a joke about rape, YOU are contributing to a society where unfortunately women are not safe.”

She concluded with a vow to report Alchin’s comments to police.

“Be warned men, the internet is no longer your invisibility cloak. I am coming after you and I will not be stopped.”

Nearly one year on, Brierley Newton’s post has had more than 700 shares and 1,200 reactions – and Alchin has been convicted of a crime.

On Friday, he was sentenced to a 12-month good behaviour bond for using a carriage service to menace, harass or offend at the Downing Centre court in Sydney, although the judge found his conduct did not amount to threatening to rape. It has been described as a test of police and legal responses to online abuse, an area that appears to be nearing crisis point.

A United Nations report released in January 2015 suggests 73% of women worldwide have been exposed to or the target of some form of cyber violence. In the 18 months since then, online abuse – particularly of women, and, in the wake of the murder of the British MP Jo Cox, particularly female politicians – has come under greater scrutiny.

But if it seems a tipping point is nearing, it is only of awareness, not action. Of the millions, maybe billions of victims around the world, Brierley Newton is among a tiny minority to have successfully pursued her case through the criminal justice system.

It wasn’t easy, she said. The officers at her local police station to whom she reported Alchin’s comments, with screenshots saved to a USB drive, were unfamiliar with the medium.

“The cop I spoke to didn’t even have Facebook – explaining to her the post, the reposting, the screenshotting, the comments, was harder than it needed to be,” she told Guardian Australia in January. “It’s ridiculous. It’s 2016. Literally everyone uses the internet.”

The case progressed only after it received media attention, she said – echoing a common complaint about social media abuse, that only high-profile users get a response to their reports.

Her interactions with Alchin and then with the police inspired her to start an advocacy group, Sexual Violence Won’t Be Silenced.

Her campaign eventually drew the attention of Clementine Ford, an Australian feminist commentator who frequently veers into activism, who shared the screenshots of Alchin’s comments with her tens of thousands of Facebook followers.

In late October, Alchin was charged.

Brierley Newton told Guardian Australia the officer who called to tell her said Alchin was apologetic and had no prior convictions in what she took to be an attempt to convince her to abandon the charge. (New South Wales police said they were unable to comment until after the appeals period had lapsed.)

Brierley Newton was better placed than many – maybe most – victims of abuse, online or offline, to pursue her case with the necessary tenacity to get results.

She is self-possessed, articulate, media savvy and a natural campaigner (disclosure: the reporter has known Brierley Newton socially for two years). Her mother, De, is lead organiser and a former candidate for the NSW Greens. Her personal Facebook profile lists her job title as a “force to be reckoned with” (and former “professional good timer”).

Alchin was charged with using a carriage service to menace, harass or cause offence, which carries a maximum penalty of three years’ imprisonment. 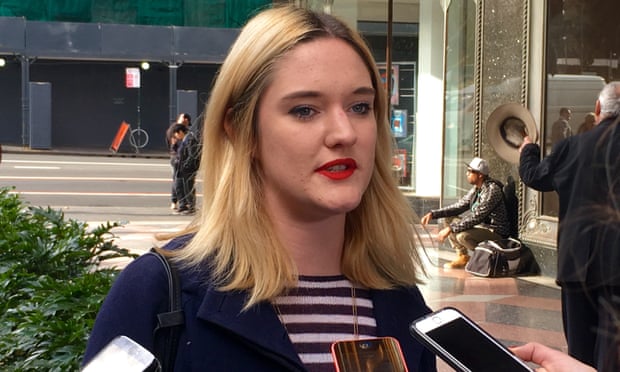 Paloma Brierley Newton, 24, speaking to reporters outside court in Sydney on the day Zane Alchin entered his guilty plea. Photograph: Elle Hunt for the Guardian

After his arrest, Alchin admitted he had written the comments but told police he was drunk at the time and that they did not reflect “what he is about”.

“He was internet trolling and was unaware it was a crime,” the police facts sheet stated.

Police put to him a specific comment he’d made, including that feminists “don’t get any action, so when you rape them it feels 100 times tighter”. Alchin said he had found it on an “anti-feminist website, to offend a group of feminists that were harassing me and my friends”.

In her victim statement, Brierley Newton said she was made to feel ambushed, harassed, intimidated, defenceless and anxious by Alchin’s comments.

But did she feel afraid?

I think I was just angered by it, to be honest,” she told Guardian Australia on Thursday, after a long pause. “I don’t think there was ever a point where I turned around and said, ‘I think this guy is going to rape me.’”

It seems Alchin’s motive was to cause offence, not to signal intention. But equally apparent is that he did not expect there could be consequences for his “trolling”.

He told police he was remorseful. But at an early court appearance, he was photographed outside extending his middle finger.

In January, his counsel pleaded not guilty on his behalf, though Alchin had admitted writing the comments and had earlier indicated he would plead guilty.

In March, a different representative indicated that his defence would rest on a legal argument as to whether the internet was a carriage service.

In late June, Alchin changed his plea to guilty. At sentencing on Friday, the court heard he had drunk half a bottle of bourbon when he made the comments, and woke up the next morning remorseful.

His lawyer, Louise Walsh, said Alchin had been threatened, “shamed and humiliated” after the case received media attention and he was held up as the “face of trolling”.

The sentencing judge, William Pierce, agreed with Walsh that Alchin’s comments did not threaten rape and said it was clear that he had been “harassed and threatened”.

He handed him 12 months’ good behaviour bond, likening dialogue online to a game of football. “There is a whirling maelstrom of hate and all sorts of unpleasantness which circulates on the net and institutions like Facebook,” he said.

“My view is that the closest analogy is a game of football. If you’re on the football field, you consent to a few bumps, so a few mildly explicit comments in the anaology … You don’t consent to be king hit with a savage right hook that knocks you out for 10 minutes.”

Pierce told Alchin: “You overdid it.”

A conviction was necessary, he said, more to deter others than Alchin – “because obviously you’ve learned your lesson, big time”.

Walsh said Alchin had been made the international “poster boy for the most vile trolling”.

But in other corners of the internet, Alchin has also been held up as a victim of the feminist movement.

“This witch-hunt against Zane Alchin has gone far enough,” stated an online petition that called for the state government to “stop the charges”. It raised eight supporters.

The Daily Stormer, “the world’s most visited alt-right web site”, proposed a different course of redress for the “hero and TOTAL BRO” Alchin. There is no suggestion that Alchin supports the broader views of the Daily Stormer or its campaign on his behalf.

A post in late June singled out Alchin’s “100 times tighter” rejoinder as “the perfectly natural response to being brutally oppressed by unhinged women your entire life”.

Its editor, Andrew Anglin, urged readers to seek “#JusticeForZane”, linking to the Facebook and (“more importantly”) Twitter presences of Sexual Violence Won’t Be Silenced and singling out individual supporters, including Brierley Newton.

“All of these women should be informed that they are ugly sluts who should not have any rights.”

So the cycle of online abuse continues but, with this sentence, one perpetrator has learned there are consequences.

And others were watching.