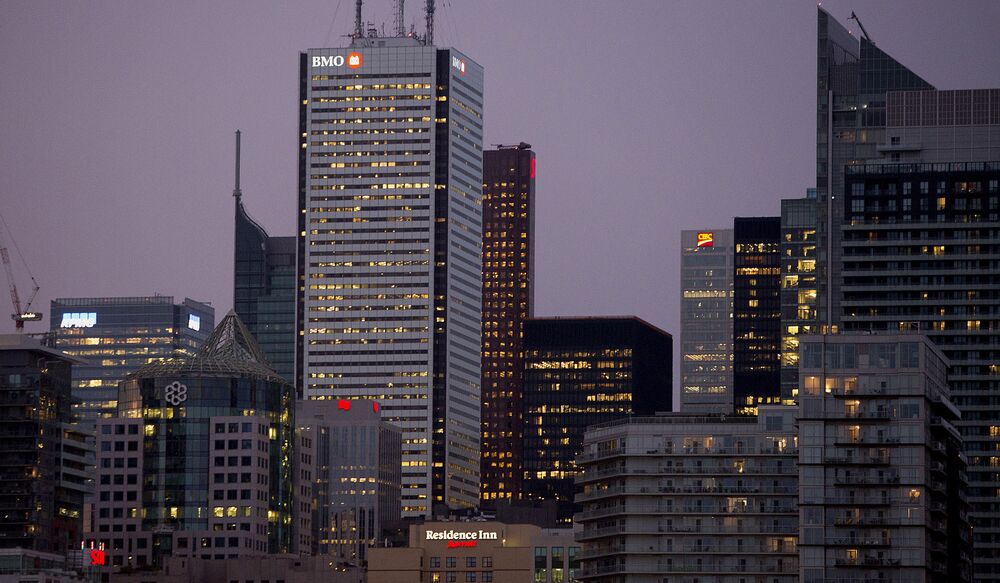 The Bank of Montreal (BMO) building, center, stands in the financial district of Toronto.

Bank of Montreal is bundling uninsured residential mortgages into bonds in what could be the start of a new debt market for Canadian banks as the government scales back its support for home loans.

The Toronto-based lender is planning to sell debt backed by nearly C$2 billion ($1.5 billion) of prime uninsured mortgages through a trust. That’s a novel development in a country where big banks have historically packaged government-insured mortgages into bonds. Much of the securities will be purchased and retained by the bank, according to Moody’s Investors Service.

If the Bank of Montreal deal is successful, other Canadian banks may follow its lead, providing banks with more financing to keep making mortgages,

“Right now the banks don’t have any other way to fund it, so there’s probably some form of internal limit on this kind of mortgage financing they’ll do,” Goldfried said by phone from Toronto.

A spokesman for BMO wrote in an email that “The transaction provides a cost-effective structure to optimize a portion of our mortgage business. We regularly look at different alternatives to meet our funding and capital objectives and this program continues that.”

But the Bank of Montreal deal may find headwinds, said Paul Gardner, partner and portfolio manager at Avenue Investment Management Inc. Canada last year tightened access to the federal insurance to help tamp down rapid home price growth in areas like Toronto and Vancouver. The federal government or Ontario could craft more legislation to cool the housing market, Gardner said.

“Residential mortgages, my God, it’s the last thing you want to invest in right now,” Gardner said by phone from Toronto. “When the capital markets are flush with cash, it makes sense that they would try at least to issue this stuff.”

Gardner said has not looked at these particular securities.

Homes have grown less affordable in Canada as housing prices have increased far faster than wages. Existing home prices rose 18.6 percent in the 12 months ended in March, while wages grew just 1.1 percent, the slowest rate since the 1990s. In Toronto, affordability reached its worst level since 1990 at the end of 2016, according to a report from Royal Bank of Canada.

Canadian banks have used covered bond programs and asset-backed commercial paper programs to securitize mortgages that do not carry government insurance, but have yet to issue term residential mortgage-backed securities unless they were through a government-sponsored program.

The Bank of Montreal bond is backed by C$1.96 billion of prime residential mortgages, more than half of which are in Ontario and Quebec, according to a Moody’s pre-sale report. Around 95 percent of the securities in the transaction will be rated Aaa. The lowest rated portion will be B2, and there is a non-rated portion as well, the bond grader said. BMO intends to purchase and hold the top three tranches of the debt, equal to about 98 percent of the principal, according to the report.

The bank will offer to renew the mortgage loans at the end of their term if the borrower is not in default, and if the borrowers satisfies the bank’s underwriting criteria at the time, which mitigates some of the risk of borrowers not being able to refinance. Canadian mortgage loans generally have a five-year term, and borrowers pay down their principal at a 25-to-30-year pace meaning they usually have to refinance a significant portion of their loan every five years.

“This is a really unique deal in the Canadian market,” Richard Hunt, an analyst at Moody’s Investors Service who rated the deal, said in an interview. “Given the pent-up demand that we think is out there on the part of banks and non-banks to have a vehicle to fund their residential mortgages, to have an RMBS market, we think this could be a significant transaction.”