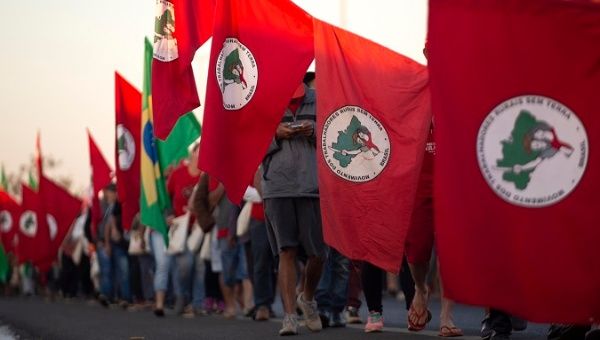 Valmir Mota de Oliveira, also known as ‘Keno,’ was murdered by a private security company hired by Syngenta in 2007.

The Justice Court of Parana has convicted Swiss agrobusiness company Syngenta of the murder of Valmir Mota de Oliveira – also known as ‘Keno,’ a member of Via Campesino and the Landless Rural Workers’ Movement (MST) – and ordered compensation be paid to the victim’s family.

The court’s decision ratified the 2015 sentence, in which a court found Syngenta responsible for Mota de Oliveira’s murder and for the attempted murder of Isabel Nascimento de Souza, also a campesino, on Thursday.

“Today justice prevailed. We know Syngenta is guilty. I’m very excited,” said Iris Maracaipe Oliveira, the leader’s widow, after hearing the sentence. “I thank God because I have never lost hope of Syngenta being condemned someday because of this tragedy. I would prefer a thousand times him to be here, but I’m sure that wherever he is, he is happy now.”

Mota de Oliveria was shot dead on October 21, 2007, at the Free Land Camp in Santa Tereza do Oeste by a security group hired by Syngenta. He was 34 years old.

About 150 members of Via Campesina, a group of social organizations including MST, were occupying a Syngenta field laboratory in which they claimed the agrobusiness transnational was carrying out illegal experiments.

The private security group shot at the demonstrators, killing Keno. Nascimento de Souza narrates she was forced to bow down to be executed but lifted her head at the time the shot was fired, losing an eye as a result.

“The bosses are responsible for the acts of their employees,” said Jose Augusto Anicero in reference to Syngenta and the private security firm. The court recognized their responsibility, but also blamed the MST and Via Campesino for occupying the land at their own risk, therefore reducing the required indemnization for the victims’ families.

“Even though the invasion of private property is blameworthy and illegitimate, they shouldn’t act on their own and impose the death penalty for their occupiers, but look for the legal means to solve the conflict,” said Judge Pedro Ivo Montero.

Judge Wellington Emanuel Coimbra de Moura was alone in making the Swiss company the sole culprit, claiming the security guards knew about the occupation and didn’t have good intentions when they decided to visit the encampment.

The lawyer who represented the activists, Fernando Prioste, said the ruling was a victory for social movements against a transnational agrobusiness giant at a time at which Brazil’s President-Elect Jair Bolsonaro has threatened to arm landlords against social movements.

“The tribunal decided that… armed attacked by a militia is illegal. Those who act in a violent manner should be held accountable,” Prioste declared.

Bolsonaro has also threatened to send MST leaders and other members to jail and treat them as “terrorists.”

Via Campesino has walked a long road in the legal fight for justice. In 2008, some of its members protested against the murder in front of the company’s headquarters in Switzerland. The Swiss Ambassador in Brazil, Rudolf Barfuss, later apologized to the widow.

Syngenta has been accused several times of violating Brazilian law with their use of GMO crops. In 2006, Campesino organization Tierra de Derechos (Land of Rights) denounced the company for using transgenic soy in the buffer zone of Iguazu Park, a protected area in which GMO are prohibited. The Brazilian Institute of Environment and Renewable Resources (IBAMA) ruled against the company and fined them about US$250,000.

The MST decided to occupy a small fraction of the 123 hectares on which Syngenta planted GMO. After Keno’s murder, a court in Parana confirmed that the Swiss company had effectively violated the law.