Many of the statements made by U.S. Supreme Court Justices in today’s hearing were shockingly not-true.  Justice Sotomayer takes the cake.

Out of all the possibilities in the U.S. for a Supreme Court Justice, how in hell did she end up on that bench?  . . . I just looked it up:  Barack Obama appointed her.

The U.S. Supreme Court today heard oral arguments pertaining to two of the Biden administration’s COVID vaccine mandates. Twitter followers called out some of the statements made by Justices, alleging the statements didn’t align with the facts. 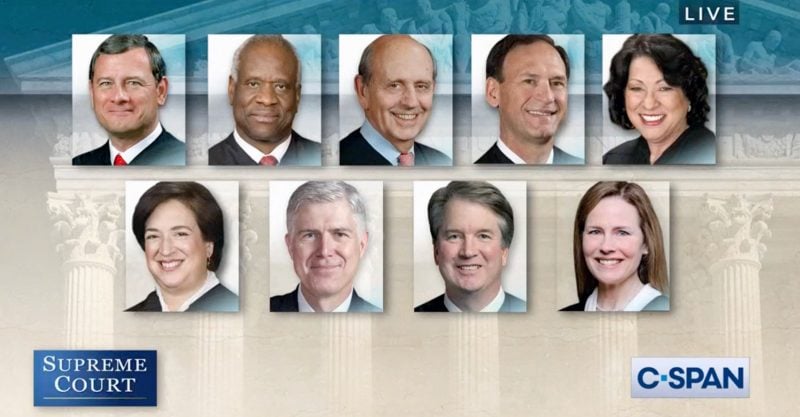 The focus of the hearing was whether to stay or to grant temporary injunctions requested by plaintiffs in a number of lawsuits challenging the emergency mandates for millions of Americans.

The two  mandates in question include one imposed on private businesses with 100 or more employees, and the one for healthcare facilities participating in the Medicare or Medicaid programs.

The judges did not rule today and gave no indication as to how quickly the court will issue orders.

Mandate penalties enforced by the Occupational Safety and Health Administration (OSHA) are scheduled to begin next week for large private employers.

According to The New York Times, members of the Supreme Court’s conservative majority appeared skeptical that the Biden administration had the legal power to impose a mandate requiring the nation’s large employers to require workers to be vaccinated against COVID or to undergo frequent testing.

But in a separate challenge regarding the U.S. Department of Health and Human Services’ Centers for Medicare & Medicaid Services (CMS) mandate for healthcare workers and facilities, some justices appeared more open to vaccine requirements for certain healthcare workers, CNN reported.

The more liberal justices defended the government’s ability to impose vaccine mandates, citing concerns over Omicron, which Justice Sonya Sotomayor claimed was more deadly to the unvaccinated than the Delta variant.

Sotomayor also expressed concern over the 100,000 children she said were hospitalized, many of whom are on ventilators.

“We have over 100,000 children,” Justice Sotomayor said, “which we’ve never had before, in serious condition and many on ventilators. So saying it’s a workplace variant just underscores the fact that without some workplace rules with respect to vaccines or encouraging vaccines because this is not a vaccine mandate.”

“We know the best way to prevent spread is for people to get vaccinated,” Justice Elena Kagan said.

Chief Justice John Roberts, Jr. and Justice Neil Gorsuch said the states and Congress, rather than a federal agency, were better equipped to address the pandemic in the nation’s workplaces.

Justice Amy Coney Barrett said the OSHA regulation appeared to reach too broadly in covering all large employers, while Justices Gorsuch and Justice Brett Kavanaugh suggested the governing statute had not authorized the agency to impose the mandate clearly, given what was at stake politically and economically.

“There’s no requirement here. It’s not a vaccine mandate,” Justice Sotomayor said during the oral arguments. “It’s something totally different.”

Justice Sotomayor appeared to be tapping into the idea that, because the mandate allows for mandatory vaccinations to be substituted by weekly testing, it is therefore not a mandate, Fox News reported.

According to OSHA, “The ETS requires covered employers to establish, implement and enforce a written mandatory COVID-19 vaccination policy with an exception for employers that instead establish, implement and enforce a written policy that requires unvaccinated employees to undergo weekly COVID-19 testing and wear a face covering at the workplace instead of vaccination.”

Scott Keller, attorney for the National Federation of Independent Business, argued the OSHA regulations had originally been passed to protect workers from unvaccinated coworkers and were now obsolete due to “CDC guidance contradicting foundational assumptions” of the regulations.

“Yes, that may be true, but we are now having deaths at an unprecedented amount, catching COVID keeps people out of the workplace for extraordinary periods of time,” Justice Sotomayor responded.

Justice Elena Kagan suggested getting a COVID vaccine reduces the spread of COVID, a claim questioned by the rising number of breakthrough cases worldwide. Justice Kagan’s opinion is that “this is the policy that is most geared to stopping all this.”

“There’s nothing else that will perform that function better than incentivizing people strongly to vaccinate themselves,” Justice Kagan said. “So, you know, whatever necessary means, whatever grave means, why isn’t this necessary and grave?”

Justice Stephen Breyer suggested being vaccinated would stop people from transmitting the virus to others, and the idea that more people would leave the workforce due to the mandates was moot because “more may quit when they discover they have to work together with unvaccinated people because that means they may get the disease.”

Justice Breyer said he would find it “unbelievable that it would be in the public interest to stop these vaccinations.”

The second hearing addressed the CMS vaccine mandate. Justice Gorsuch asked a series of questions to Brian Fletcher, principal deputy solicitor general for the Biden administration, about the impact of the vaccine mandates and how it can be viewed as potentially controlling the employment of healthcare workers, which is not allowed by the law.

“This regulation affects, we’re told,10 million healthcare workers and will cost over a billion dollars for employers to comply with. So what’s your reaction to that, why isn’t this a regulation that effectively controls the employment and tenure of healthcare workers at hospitals? An issue Congress said the agency didn’t have the authority and that should be left to the states to regulate.”

Elizabeth Murrill, Louisiana solicitor general, reminded the court the case is not about whether “vaccines are effective, useful or a good idea. It’s about whether this federal executive branch agency has the power to force millions of people working for or with a Medicare or Medicaid provider to undergo an invasive, irrevocable forced medical treatment — a COVID shot.”

Twitter erupted over what some considered to be disinformation perpetuated during the hearing and over concerns false information would influence the Supreme Court’s decision.

Here is Justice Sotomayor saying that “hospitals are almost all full capacity” and there are “over 100,000 children” hospitalized with covid “many on ventilators,” Price tweeted:

As The Defender reported Jan. 3, the Supreme Court’s move to hold oral arguments in deciding whether or not to issue an emergency stay is considered unusual.

Typically, such cases are placed on the “shadow docket” and are decided without a full briefing or a presentation of oral arguments.

The decision by the Supreme Court on whether to stay the mandate will provide a strong indication for employers about what they will or won’t need to do to come into compliance.

The Biden administration’s ETS mandating employers with over 100 employees get vaccinated, or if unvaccinated, wear a mask and get tested weekly, has faced many court challenges.

The cases were consolidated and the 6th circuit recently lifted a stay on the mandate imposed by the 5th circuit, prompting the case to make its way to the Supreme Court.

CMS announced Dec. 29, 2021, it will begin enforcing its COVID vaccine mandate in the 26 states where it is not blocked. A modified enforcement timeline accompanied this announcement: Healthcare workers will now be required to receive the first dose of a COVID vaccine by Jan. 27, and the second dose by Feb. 28.