Health » Vaccinations (incl corruption of science & govt) » 2022-01-04 Rogan and Malone: Most Important Interview of Our Time?

In an interview with Joe Rogan, Dr. Robert Malone, mRNA vaccine expert and outspoken critic of our pandemic response, delivered a powerful message to the world. Yes, it’s three hours long, and yes, it’s worth every minute. 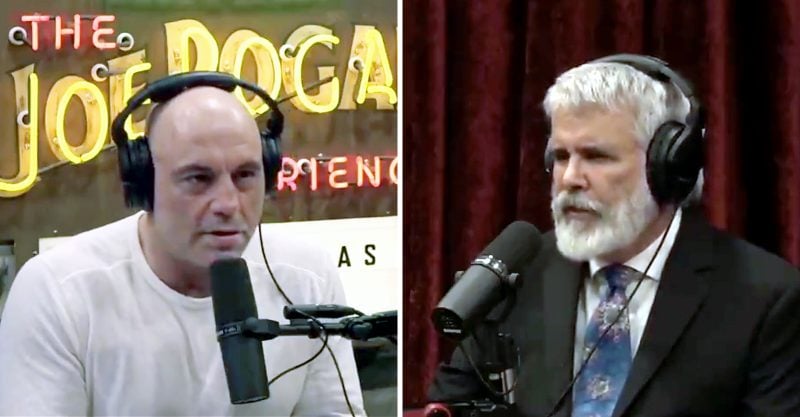 Something monumentally important happened in the closing days of 2021.

Joe Rogan, host of the widely viewed “Joe Rogan Experience” podcast, interviewed one of the world’s most qualified and unbiased individuals about the safety and efficacy of the COVID-19 vaccines now deployed upon nearly 4 billion human beings.

He has been involved in nearly every infectious disease outbreak since the AIDS epidemic, has worked for the National Institutes of Health awarding millions of dollars in contracts for vaccines and biodefense, and spent “countless hours” at Centers for Disease Control and Prevention Advisory Committee for Immunization Practices meetings.

Malone works closely with the Defense Threat Reduction Agency, knows Dr. Anthony Fauci personally and is possibly best known for his instrumental work in developing the platform for mRNA-based vaccine technologies more than 30 years ago.

On Dec. 30, 2021, Malone and Rogan sat down in Rogan’s studio in Austin, Texas, and recorded a riveting three-hour conversation.

Rogan stands alone as an independent voice outside of corporate media that is able to reach a politically and ideologically diverse audience of 11 million or more per episode.

Similarly, Malone is an outspoken critic of vaccine mandates who represents the opinion of a large and growing number of researchers and clinicians who believe our approach to the pandemic has been poorly conceived and stands in opposition to basic tenets of immunology, epidemiology and emerging real-world data.

It was clear both were prepared for the encounter. Rogan reported he had been following the doctor’s tweets, has been reading everything Malone has been writing and was clearly versed in the latest and most salient scientific findings.

Malone, though honed by countless appearances on various platforms, admitted this interview was special because of its potential impact on public opinion.

The conversation opened with Malone summarizing his bonafides and then describing his approach to engaging his audiences.

“I try really hard to get people the information and help them to think, not tell them what to think,” Malone said.

Malone was true to his method throughout, being careful to identify fact from speculation, noting what is observed without assuming intent while helping Rogan explore the rabbit holes that we inevitably encounter when choosing to look just a bit further beyond what has become socially acceptable.

The two spoke of Malone’s recent loss of his Twitter account. The doctor was banned from the platform without warning or explanation. He speculated it may have been due to one or both of his final two tweets, one which brought attention to the Canadian COVID Care Alliance’s summary of the Pfizer trial, the other to the World Economic Forum’s strategy for managing media around COVID.

Rogan repeatedly voiced his concern around the silencing of opinions from legitimate experts.

“If it’s not okay for me to be a part of the conversation … even though I’m pointing out facts that may be inconvenient, then who can be allowed? Virtually all others that have [my] background have conflicts of interest…I am not getting any money out of this…”

Over the next two-and-a-half hours the two demonstrated how we can make sense of conflicting messaging and complex data by asking the right questions and being open to the answers, if they exist.

The vaccinologist, inventor and staunch advocate for informed consent told his personal story of getting COVID, suffering from long-COVID, getting the Moderna vaccination and suffering adverse events (stage III hypertension, heart arrhythmias, restless leg syndrome and narcolepsy) after the second jab.

Rogan took full advantage of his time with Malone, asking the questions media refuse to pose to their own identified “experts.”

The result was a full-scale repudiation of our pandemic response from its inception to the vaccine mandates that are in violation of the Nuremberg Code.

Malone and Rogan thoroughly probed many angles of our present situation from, T-cell dysfunction to the Trusted News Initiative.

Here are some of the key points discussed with time codes:

Malone concludes, “There are two hills that I am willing to die on. The first is stopping the jabs on the children. [The other] is resisting the erosion of free speech …”

It is clear the former can only be accomplished if the latter is as well. Though this three-hour exchange sheds light on the numerous challenges we face as a society, it can only result in real transformation if people are willing and able to listen.

Four days after this content was released, YouTube removed the video from its platform. It can still be seen here on Bitchute.

As Malone repeatedly pointed out, Big Tech, Big Pharma and governmental authorities are concerted in their efforts to suppress any dissenting opinion at any cost, including the health of our children.

Clarity, it seems, will only emerge from sources untrammeled by corporate interests.

Thankfully the magnitude of the problem was not lost on Rogan who stated, “I am compelled to have people like you on because I don’t know where else this is going to get out.”

Rep. Troy Nehls (R-Texas) submitted the full transcript of Rogan’s interview with Malone to the Congressional Record, where it cannot be cnesored.

Watch the full interview with Malone on the “Joe Rogan Experience” podcast: